Hookah Diffuser - What For and How to Use It?

Hookah is a device that consists of several parts. Some are the main components, for example, a stem, a base, a bowl - you can’t smoke without them. But there are additional accessories. They are usually not included in the basic package, but their use makes the smoking process much nicer or can give it new shades. A diffuser is one of such devices. It makes the pull smoother and lighter, helps to cool and filter the smoke better.

Diffusers are used in hookahs to separate the main stream of smoke and create hundreds of small bubbles, instead of several large ones, as in the usual case. This effect has a number of advantages, such as smoother smoke pull through a hookah, more thorough filtering, and a noise reduction when using a hookah. 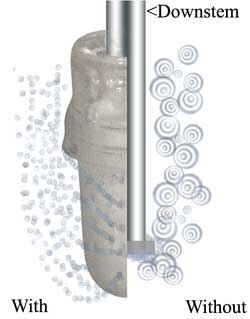 Why use a hookah diffuser?

The main application of the diffuser is for smoothing and facilitating the smoke pull through a hookah. Since the diffuser breaks the bubbles in the base into many small ones, it becomes easier and more pleasant to pull the smoke. Another reason to use a diffuser is better smoke filtration. As the number of bubbles increases, their total surface area increases, too. By increasing the area, more smoke particles come into contact with water, and thus the water becomes a much more efficient filter. Finally, a diffuser is used to reduce the noise when smoking a hookah. Small bubbles overcome the surface tension of water much easier than large ones, so the noise level with a diffuser is much lower than without it.